Where are the crowds? 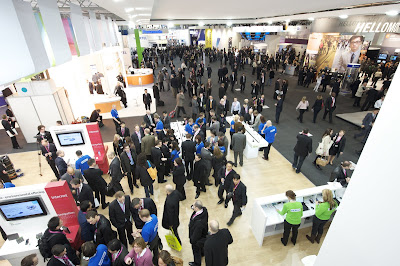 So the first day of Mobile World Congress is over and the two photos show that this year the show is slower than in the past.  Taken from the first floor of the Nokia stand at 11:00 where last year we would have seen a cloud to match that of a Milan derby this year it looks like Bolton v Portsmouth.
The second photo shows the main meeting zone at noon.
Talking to some who are working for vendors at the show and they talk about having to work on the stand as headcount has been cut to less than half of what we saw in 2008. 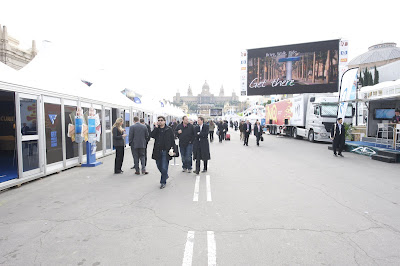 Whilst I like the extra room I have to ask if it is good business for the organisers.  Effectively the show is paid for by the Vendors who hope to meet customers from the networks.  If the Networks are not sending the staff then the Vendors will have to ask if the investment is worth it.
Talking to one small company I discovered that they were spending €200K on attending MWC.  They will need to see €2M worth of sales to say that the trip was worthwhile.  This just goes to show that in these financial times some parties have to come to an end and hard cash needs to work.
Posted by Ian Wood. Principal Wireless Foundry LLP at 5:27 pm