For Nokia its all about E... 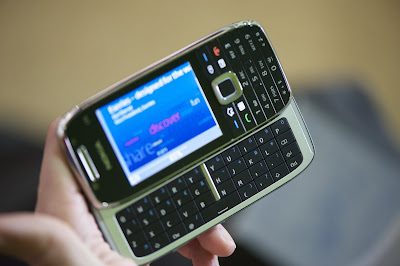 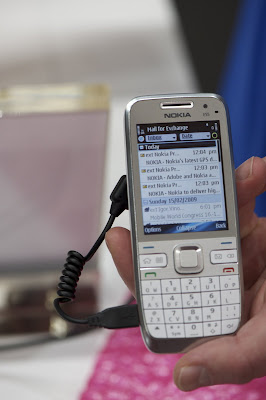 Today Nokia presented to the world two new E-Series handsets the E55 which aims to offer a low cost version of the E71 (which has shipped 10M units in the six months that it has been available) and the E75 (top).  Both of these devices are about giving email to as many people as possible at the lowest cost.  In the remarks from the head of handsets and the CEO of Nokia the primary attack was on Blackberry who they accused of charging an email tax.  As a side line that went for Apple saying that "without a diverse handset range you walked on a knife edge if you had just one product".
The E75 is said to have the best battery life of ANY handset in the Nokia range with 100 Hours claimed on stand by.  The E55 is thinner than the current E71 because it has a micro QWERTY keypad which will help alot of those without a PC use e-mail to make this easy they have launched OVIMAIL for those who at present do not have a Gmail account.
For Nokia the E is not just about a Series of handsets but also about EFFICIENCY making work not a place you go but something that you do regardless of place.  It is also about getting Networks to ship its product in the region of 1M units a day something it is falling short on at this moment.
Posted by Ian Wood. Principal Wireless Foundry LLP at 5:48 pm

I think the next one should be E75 but I need a phone camera for my anthropological documenting on the move.. After all I am a Nokia champion since 1995! Why change now?

Is it just me, or is the tide turning where its the quality of the camera that becomes the trigger for an increasingly important segment of the market to purchase a mobile phone?