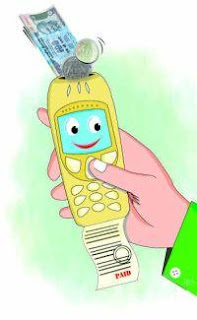 Yesterday's Sunday Times had a good analysis about mobile banking. Just a shame that the vision of Orange has not been executed by the New Owners!

The final sections where they talk about Mobile Banking in the UK should be something that is read and understood by the GSMA before they start the push into Remittances. Once again the focus needs to be on micro payments rather than competing with Western Union for those Operators in Europe. My Polish builder returns home every 6-8 weeks on a cheap flight carrying cash, he trusts no one when it comes to his money.

However the ability to replace small value transactions with a simple test message will cut the ques at Starbucks and as the FT's Undercover Economist shows the use of gift cards is not something that everyone approves of. If you want to give a small present why not send it as a top up someones phone credit rather than a crisp new bank note?

The problem is that with five network operators we have too many billing systems to connect if we are to make m-money work. We cannot allow a third party to facilitate cross network payments as they would expect to be paid a commission. Perhaps we need to move towards structural separation and thus billing just becomes a service layer?
Posted by Ian Wood. Principal Wireless Foundry LLP at 9:32 am